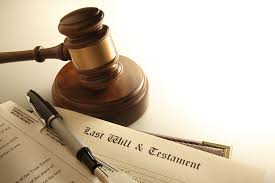 Charles A. Redd discusses restrictions on an laws relating to no contest clauses.

A beneficiary may be motivated to contest a will or trust instrument because he believes he has sufficient grounds to invalidate the document (for example, due to forgery, lack of proper execution, fraud, incapacity, undue influence, duress) and stands to gain economically if successful. A successful challenge to the validity of a document will cause the decedent’s estate or trust to pass intestate or pursuant to an earlier document that wasn’t contested (or wasn’t contested successfully).

Most no contest clauses—sometimes known as “in terrorem” or “forfeiture” clauses—are intended to discourage a contest of a will or trust instrument by removing the beneficiary who challenges the validity of the applicable instrument. The foundation on which no contest clauses rest is the almost universally accepted principle of American jurisprudence that, with few exceptions, a property owner should be able to dispose of his property in whatever manner he sees fit.

If a testator or settlor has completely removed a child or other individual whom the testator or settlor believes would challenge the will or trust instrument, a no contest clause won’t serve its purpose. In such a case, that child or other individual has nothing to lose by bringing a challenge. Thus, the use of no contest clauses is effective only when there’s a sizable enough bequest or gift to make the target beneficiary think twice about a challenge.

No Contest of Trustee Actions

Some clients are concerned that, while the beneficiaries may not want to attack the validity of the will or trust instrument, they may develop a confrontational attitude toward the fiduciaries chosen by the client. Consequently, such clients sometimes insert clauses that provide that, if any beneficiary should challenge or attack the actions of an executor, personal representative or trustee, such beneficiary and his descendants shall forfeit their share of the estate or trust ( a “breach of duty no contest clause”). A breach of duty no contest clause is sometimes said to be a variety of exculpation clauses and held to standards governing those clauses.5 A breach of duty no contest clause, however, is materially different from an exculpation clause in that, with an exculpation clause, there’s no possibility that a beneficiary who challenges a fiduciary’s acts or omissions will be removed as a beneficiary if the court finds the challenge not to be justified.

A no contest clause may be a double-edged sword—particularly in those states where the courts just apply the words of the clause as written. On one hand, a no contest clause may prevent costly, time-consuming, unnecessary and unwarranted litigation. Such a clause can also help prevent private family information from being exposed to public view and scrutiny. On the other hand, inclusion and the threat of enforcement of a no contest clause may lead to an unjust result (a document that could have been proven invalid remains operative because no beneficiary was prepared to risk an unsuccessful challenge and his resulting removal as a beneficiary).

In those states where a no contest clause won’t be enforced when the challenger had probable cause for contesting,7 courts strive to achieve a balance between honoring the testator or settlor’s wishes and promoting sound public policy. The law as developed in these states reflects a philosophy that courts have a duty to ensure that wills and trust instruments are legitimate and that courts can fulfill this duty only when interested parties with non-frivolous concerns are able without fear to raise issues of validity.

Some Suits Not Contests

Not all litigation that raises questions about the provisions of a will or trust instrument is a contest of the document. A suit to construe a will or trust instrument is universally understood as a way of carrying out a testator or settlor’s intent and not constituting a violation of a no contest clause.8 A suit to construe is a “search for the true meaning of a will” and not a way to sidestep the testator or settlor’s intention.9 In contrast, a no contest clause is triggered when a beneficiary is “attempting to set aside, contest or appeal from a decision sustaining the validity of an instrument.”10 Similarly, suits that determine rightful ownership of property are typically deemed suits to construe and, accordingly, not triggering actions.11 Claims by beneficiaries that indirectly request construction of a will or trust instrument have also been found to be suits to construe and, therefore, outside the scope of a no contest clause.12

Would-be contestants sometimes bring declaratory judgment or declaratory relief actions seeking a determination of whether a proposed or pending action would constitute a contest that would trigger a no contest clause. Statutes in Missouri, New Hampshire and Delaware13provide, and case law in other states14 has held, that no contest clauses are unenforceable against such actions.

In light of the various state laws concerning and restrictions on no contest clauses, careful design is crucial to the enforcement and success of each clause. Practitioners should discuss with their clients the types of actions they desire to cause the clause to be triggered. For example, should mere filing of a petition to contest trigger the clause, or must the petition actually be brought to a final adjudication for the clause to be operative? Consider, also, whether to include language stating that one who provides financial support to others who bring a prohibited claim forfeits his rights under the will or trust instrument. In some cases, perhaps a challenge to specific provisions of a will or trust instrument should be punished to a lesser extent than a challenge to the validity of the entire document. Should the clause in a given will or trust instrument be triggered by a contest of other documents such as documents that implement business succession plans? Should the clause be triggered by challenges to the actions of an executor or trustee? Should the clause specifically state the testator or settlor intends the clause to apply irrespective of a contestant’s good faith or probable cause?15 If the goal is to disinherit a particular individual if he takes certain actions, should the clause also apply to disinherit that individual’s children? Lastly, should the clause apply to suits brought on behalf of minor or incapacitated beneficiaries?16

3. For example, Arkansas, Hawaii, Kansas, Michigan, Montana, Nevada, New Jersey, Pennsylvania and Texas. See also Restatement (Third) of Property (Restatement (Third)) Section 8.5 (2003), which states: “A provision in a donative document purporting to rescind a donative transfer to, or a fiduciary appointment of, any person who institutes a proceeding challenging the validity of all or part of the donative document is enforceable unless probable cause existed for instituting the proceeding.”

4. For example, District of Columbia, Georgia, Massachusetts, Missouri and Wyoming.

6. A shocking example of this is Knopik v. Shelby Investments, LLC, 2019 WL 2093887 (Mo.App. W.D. May 14, 2019). In Knopik, a trustee inexplicably stopped making mandatory distributions to a beneficiary and informed the beneficiary no further distributions would be made. The beneficiary filed suit alleging breach of trust and seeking trustee removal. The governing instrument contained a no contest clause that, among other things, terminated the interest of a beneficiary who made a claim against the trustee for breach of trust or sought the trustee’s removal. The trustee sought a declaratory judgment that, because of the no contest clause, the beneficiary’s beneficial interest had terminated. Affirming the trial court’s ruling for the trustee, the Missouri Court of Appeals held a no contest provision must be enforced when there’s clear intent on the part of the trustor that particular conduct by a beneficiary shall cause forfeiture of the beneficiary’s interest. In my opinion, Knopik is a seriously flawed decision. The court was seemingly oblivious to the reality that, if a trustee can willfully, without reason and with impunity, deprive a beneficiary of his beneficial interest, there’s no trust. Just as no exculpatory provision in a trust instrument is ever interpreted so broadly as to allow a trustee’s intentional bad acts to stand, the Knopik no contest clause shouldn’t have been enforced to allow the trustee to steal the beneficiary’s interest from him.

7. “Probable cause exists when, at the time of instituting the proceeding, there was evidence that would lead a reasonable person, properly informed and advised, to conclude that there was a substantial likelihood that the challenge would be successful. A factor that bears on the existence of probable cause is whether the beneficiary relied on the advice of independent legal counsel sought in good faith after a full disclosure of the facts.” Restatement (Third) Section 8.5 cmt. c.

15. But see Winningham v. Winningham, 966 S.W.2d 48, 53 (Tenn. 1998) (holding that the portion of the clause applying to contests brought in good faith and with probable cause was against public policy).

Other
Analytics
Performance
Save & Accept
Powered by CookieYes